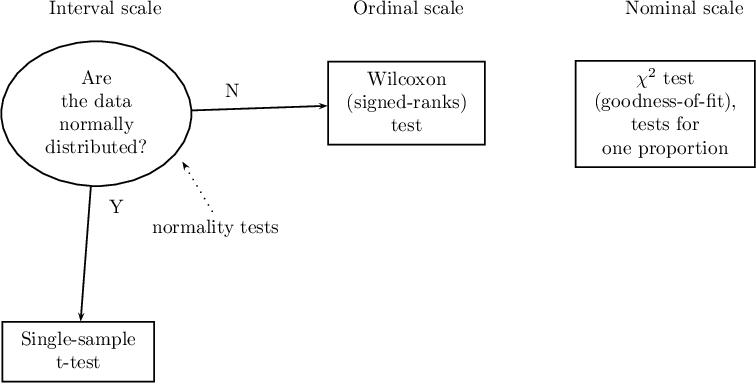 The t-test for a single sample

test is used to verify the hypothesis, that an analysed sample with the mean (

) comes from a population, where mean (

) is a given value.
Basic assumptions:

– mean of an analysed feature of the population represented by the sample,

– standard deviation from the sample,

The test statistic has the t-Student distribution with

Note, that: If the sample is large and you know a standard deviation of the population, then you can calculate a test statistic using the formula:

The statistic calculated this way has the normal distribution. If

. In practice, it is assumed, that with

The Cohen's d determines how much of the variation occurring is the difference between the averages.

The settings window with the Single-sample <latex>$t$</latex>-test can be opened in Statistics menu→Parametric tests→t-test or in ''Wizard''. 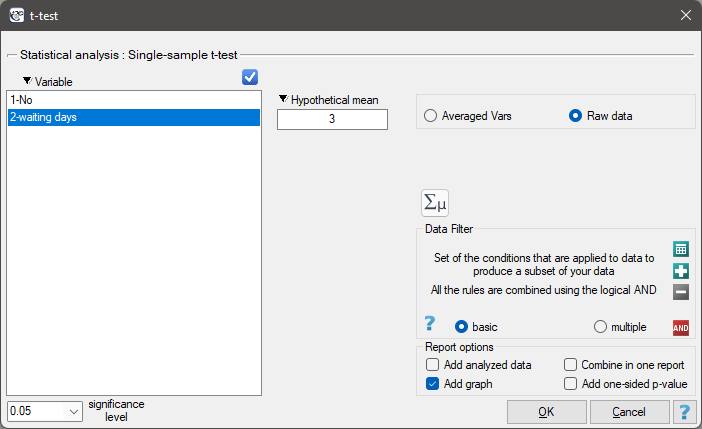 Calculations can be based on raw data or data that are averaged like: arithmetic mean, standard deviation and sample size.

The number of awaiting days for the delivery in the analysed population fulfills the assumption of normality of distribution. 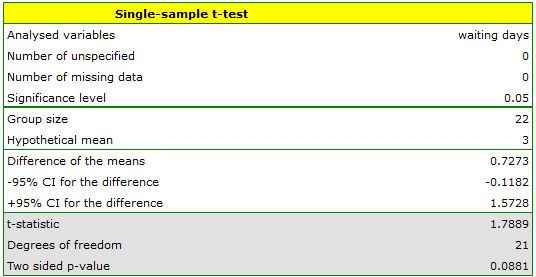 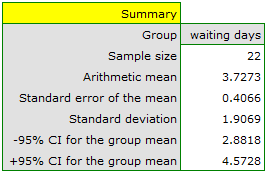 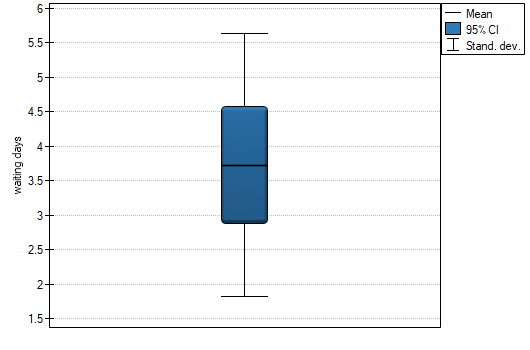 -test with the significance level

we draw the conclusion, that there is no reason to reject the null hypothesis which informs that the average time of awaiting for the delivery, which is supposed to be delivered by the analysed courier company is 3. For the tested sample, the mean is

and the standard deviation is

The Single-Sample Chi-square Test for a Population Variance

– standard deviation of a characteristic in the population represented by the sample,

– standard deviation in the sample,

The test statistic has the Chi-square distribution with the degrees of freedom determined by the formula:

Whereby, if the standard deviation value is less than the setpoint, the 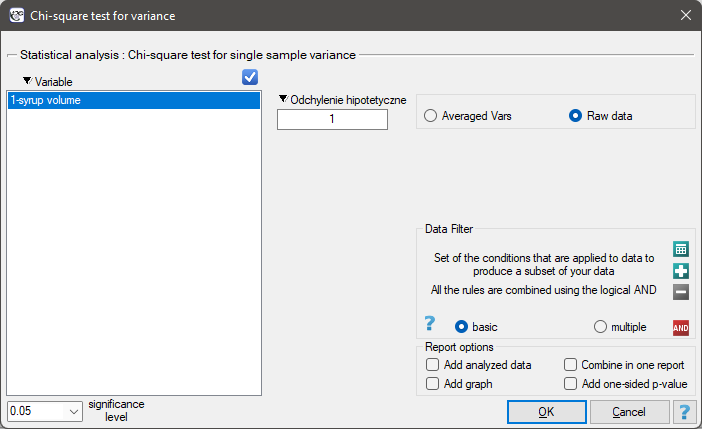 Calculations can be based on raw data or data that are averaged like: standard deviation and sample size.

Before starting the production of another batch of a certain cough syrup, control measurements of the volume of syrup poured into the bottles were made. The technical documentation of the dosing device shows that the permissible variation in syrup volume measured by the standard deviation is 1ml. It should be verified that the tested device is working properly.

The distribution of the volume of syrup poured into the bottles was checked (with the Lilliefors test) obtaining a result consistent with this distribution. The analysis concerning the standard deviation can therefore be performed with the chi-square test for variance 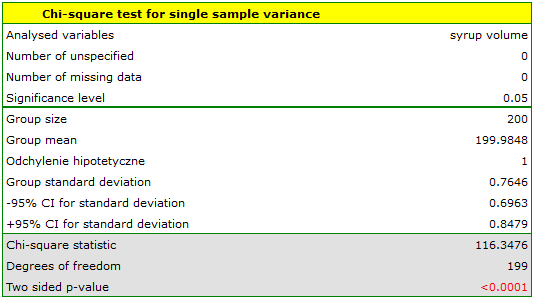 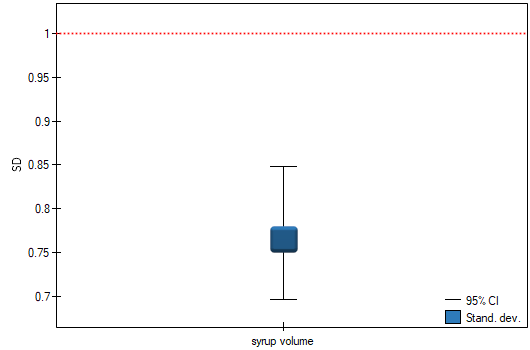 test with the significance level

we find that the scatter of the dispensing device is different from 1ml. However, we can consider the performance of the device as correct because the standard deviation of the sample is 0.76, which is significantly less than the acceptable value from the technical documentation.

The Wilcoxon signed-ranks test is also known as the Wilcoxon single sample test, Wilcoxon (1945, 1949)2). This test is used to verify the hypothesis, that the analysed sample comes from the population, where median (

– median of an analysed feature of the population represented by the sample,

Now you should calculate the value of the test statistics

– for the small sample size), and based on this

Depending on the size of the sample, the test statistic takes a different form:

are adequately: a sum of positive and negative ranks.

This statistic has the Wilcoxon distribution.

- the number of cases being included in the interlinked rank.

statistic asymptotically (for a large sample size) has the normal distribution. Continuity correction of the Wilcoxon test (Marascuilo and McSweeney (1977)3))

The distribution of the Wilcoxon test statistic is approximated by the normal distribution, which can be converted to an effect size

4) to then obtain the Cohen's d value according to the standard conversion used for meta-analyses: 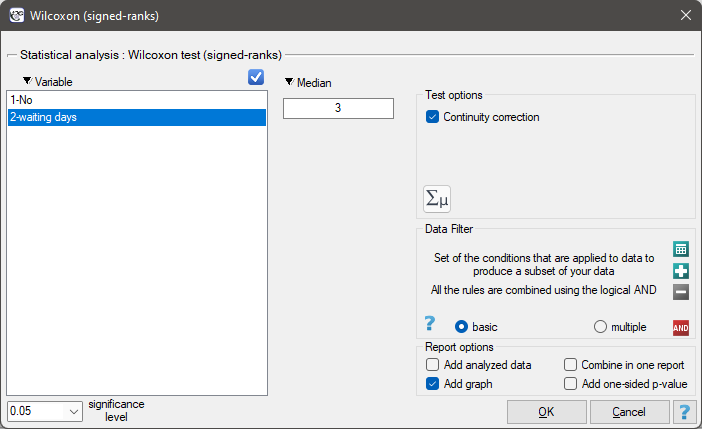 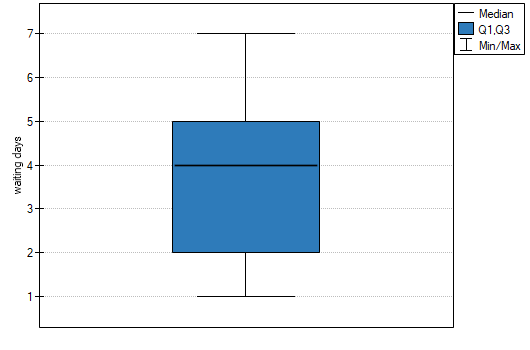 statistic with the significance level

we draw the conclusion, that there is no reason to reject the null hypothesis informing us, that usually the number of awaiting days for the delivery which is supposed to be delivered by the analysed courier company is 3. Exactly the same decision you would make basing on the p-value = 0.1112 or p-value = 0.1158 of Wilcoxon test based upon

with correction for continuity.

test (goodnes-of-fit) is also called the one sample

with hypothetical expected values for this feature. The values of all

there is written the frequency of its occurence

, and its expected frequency

or the probability of its occurence

. The expected frequency is designated as a product of

. The built table can take one of the following forms:

Test statistic is defined by:

This statistic asymptotically (for large expected frequencies) has the Chi-square distribution with the number of degrees of freedom calculated using the formula:

.
The p-value, designated on the basis of the test statistic, is compared with the significance level

The settings window with the Chi-square test (goodness-of-fit) can be opened in Statistics menu → NonParametric tests (unordered categories)→Chi-square (goodnes-of-fit) or in ''Wizard''. 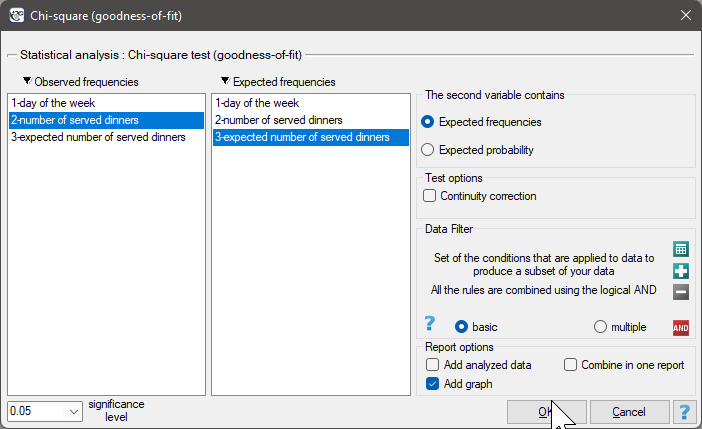 We would like to get to know if the number of dinners served in some school canteen within a given frame of time (from Monday to Friday) is statistically the same. To do this, there was taken a one-week-sample and written the number of served dinners in the particular days: Monday - 33, Tuesday - 29, Wednesday - 32, Thursday -36, Friday - 20.

As a result there were 150 dinners served in this canteen within a week (5 days). We assume that the probability of serving dinner each day is exactly the same, so it comes to

. The expected frequencies of served dinners for each day of the week (out of 5) comes to 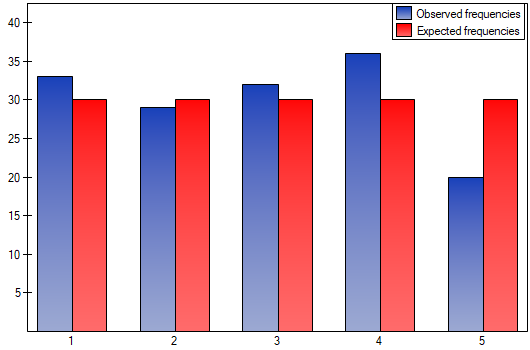 The p-value from the

distribution with 4 degrees of freedom comes to 0.2873. So using the significance level

you can estimate that there is no reason to reject the null hypothesis that informs about the compatibility of the number of served dinners with the expected number of dinners served within the particular days.

If you want to make more comparisons within the framework of a one research, it is possible to use the Bonferroni correction7). The correction is used to limit the size of I type error, if we compare the observed frequencies and the expected ones between particular days, for example:

Provided that, the comparisons are made independently. The significance level

for each comparison must be calculated according to this correction using the following formula:

is the number of executed comparisons. The significance level for each comparison according to the Bonferroni correction (in this example) is

However, it is necessary to remember that if you reduce

for each comparison, the power of the test is increased.

Tests for one proportion

You should use tests for proportion if there are two possible results to obtain (one of them is an distinguished result with the size of m) and you know how often these results occur in the sample (we know a Z proportion). Depending on a sample size

The additional condition for the Z test for proportion

– probability (distinguished proportion) in the population,

The Z test for one proportion

distinguished proportion for the sample taken from the population,

– frequency of values distinguished in the sample,

The test statistic with a continuity correction is defined by:

statistic with and without a continuity correction asymptotically (for large sizes) has the normal distribution.

Binomial test for one proportion

The probability for the specific point in this distribution is calculated using the formula:

– frequency of values distinguished in the sample,

Based on the total of appropriate probabilities

value is defined as a doubled value of the less of the one-sided probabilities.

The p-value is compared with the significance level

Note that, for the estimator from the sample, which in this case is the value of the

proportion, a confidence interval is calculated. The interval for a large sample size can be based on the normal distribution - so-called Wald intervals. The more universal are intervals proposed by Wilson (1927)9) and by Agresti and Coull (1998)10). Clopper and Pearson (1934)11) intervals are more adequate for small sample sizes.

Comparison of interval estimation methods of a binomial proportion was published by Brown L.D et al (2001)12)

The settings window with the Z test for one proportion can be opened in Statistics menu→NonParametric tests (unordered categories)→Z for proportion. 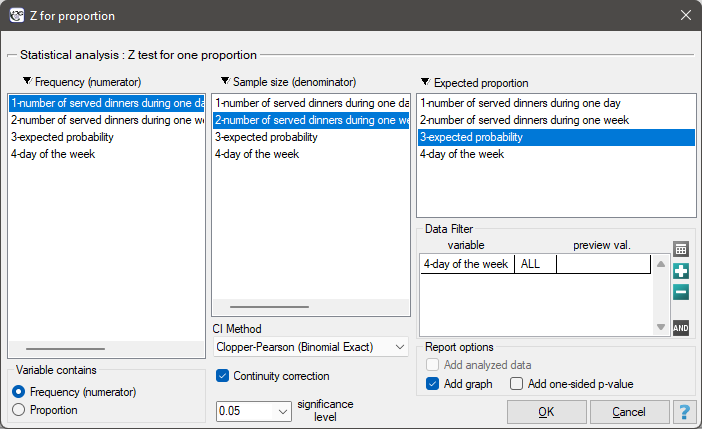 Assume, that you would like to check if on Friday

of all the dinners during the whole week are served. For the chosen sample

Select the options of the analysis and activate a filter selecting the appropriate day of the week – Friday. If you do not activate the filter, no error will be generated, only statistics for given weekdays will be calculated. 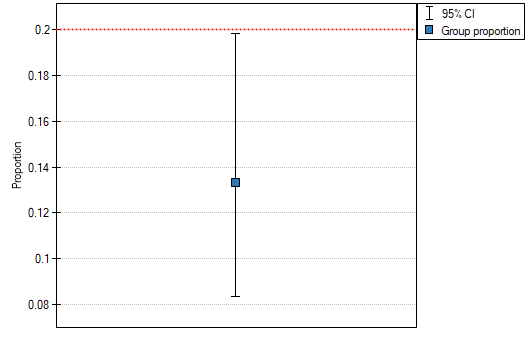 The proportion of the distinguished value in the sample is

and 95% Clopper-Pearson confidence interval for this fraction

does not include the hypothetical value of 0.2.

Based on the Z test without the continuity correction (p-value = 0.0412) and also on the basis of the exact value of the probability calculated from the binomial distribution (p-value = 0.0447) you can assume (on the significance level

), that on Friday there are statistically less than

dinners served within a week. However, after using the continuity correction it is not possible to reject the null hypothesis p-value = 0.0525).