Boundaries of an area in which analysed points are enclosed can be defined, depending on a particular need, with the help of: a convex hull, the smallest rectangle, a rectangle from from layer bounding, or the smallest circle. The studied area can also be defined only with the use of the size of its area.

The distance between the points is measured with the Euclidean metric.

The basic statistics made for point analysis:

The analysis also gives a graph pertaining to a distance matrix and layers which can be drawn on the surface of a map. Layers pertain to centrographic measures: the measure of central tendency and the measure of dispersion:

The radius of the circle is

The angle of the inclination of an ellipse axis (Y) with respect to the coordinate system (OY axis) is expressed with the formula:

The lengths of the semiaxes of an ellipse:

The lengths of rectangle sides are:

are standard deviations for the coordinates of the

axes After the weights for particular objects have been defined, we calculate the weighted center of point distribution and the weighted circle representing the standard deviation area.

– weights representing the value of a feature in the

The radius of the circle is

– weighted standard distance from the center expressed with the formula:

In the formulas concerning the lengths of the radius of a circle and of a semiaxis of an ellipse, the denominator was decreased by value 2 – Buliung (2008)1), Smith (2007)2). 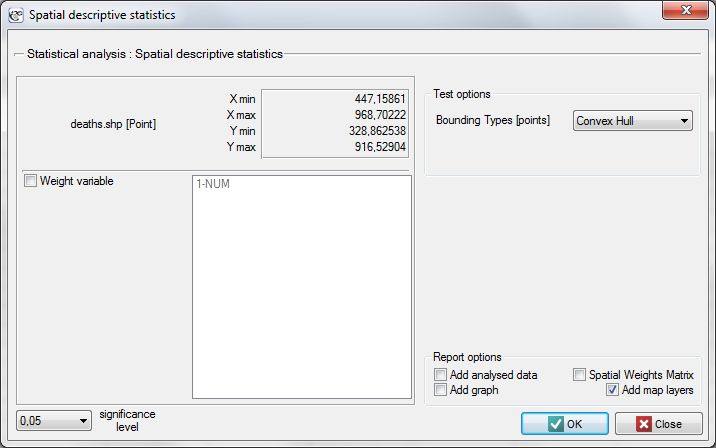 Data for the analysis are probably the best known, classical example of the use of cartography in epidemiology. They present the epidemic of cholera in London in 1854. The map which presents the range of the epidemic was made by John Snow, a doctor and the discoverer of the cause of the epidemic, considered to be one of the founders of epidemiology. The coordinates of points which constituted the basis for drawing the maps come from the original John Snow's map which was digitalized by Rusty Dodson from the US National Center for Geographic Information Analysis (http://ncgia.ucsb.edu/Publications/Software/cholera/) and later presented in meters.

After importing the above shapefiles (SHP) we can view and edit each of them in the Map manager. 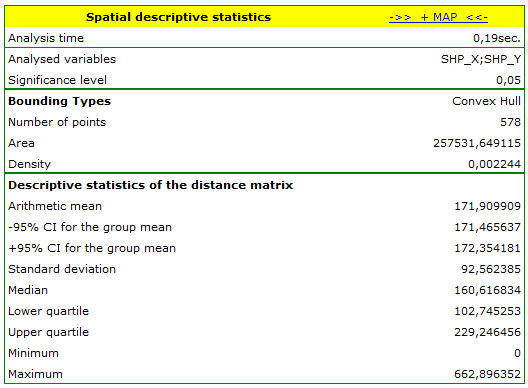 . We can draw them on the map by pressing the button

and selecting the layer of object bounding. 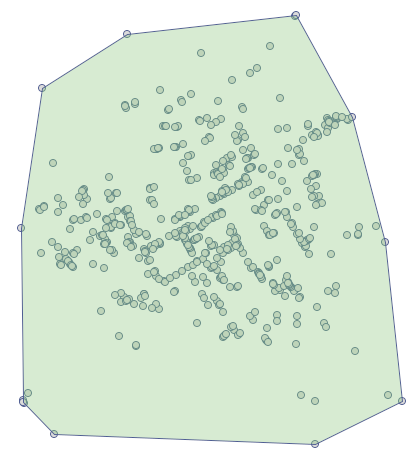 There is on average over 2 points per

The analysis of the point distance matrix allows a more exact evaluation of their density. Some points are in the same place because the smallest distance is

. There are also points at a far greater distance from each other – the greatest distance is

. We can also find information about the average distance and the standard deviation of the points here.

), together with the area of standard deviations which describe the the degree of concentration and the direction of dispersion (circle, ellipse, rectangle).

The ellipse of standard deviations and the Center is drawn again by moving on to the map manager (on the layer list we uncheck the bounding). 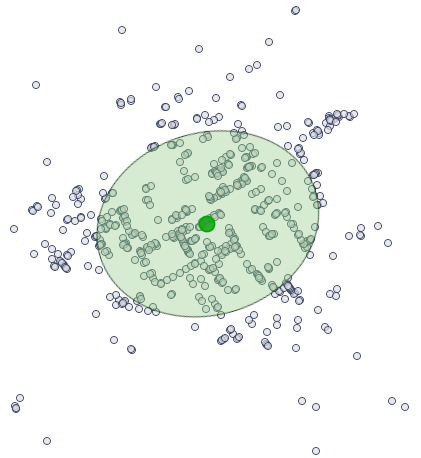 As a result of conversations with local people, Snow suspected that water could have been the source of the epidemic. When the three maps are joined we can identify the water pump the water from which turned out to be the cause of the epidemic. To find it we should first display the streets map in the Map Manager and next we should overlay the deaths map and the pumps onto it by pressing the button 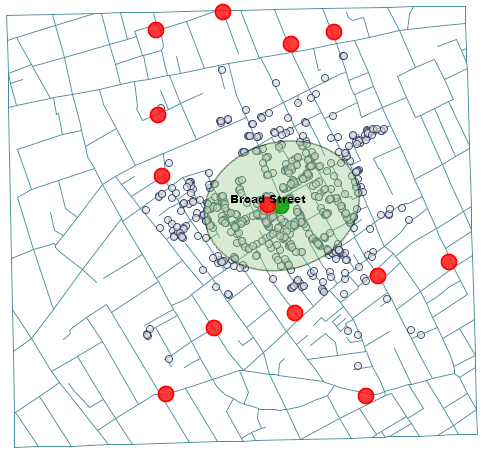 The source of the epidemic turned out to be the water pump on the Broad Street (we can display its label in the Map Manager). That is the only pump which was in the selected elliptical area, and its location (678.85, 633.27) and the location of the middle of the ellipse (

), i.e. the place around which the deaths centered, are very close to each other.