Spatial relations among objects presented on a map can be organized in the form of a matrix. The matrices are called weights matrices. Due to their large size and a great amount of detailed information, weights matrices are not carriers of knowledge which could be presented directly in the results of a conducted study but they form the basis of further analysis. The data included in the matrices are usually treated as weights in spatial analyses and, in this manner, allow to use the information from the map. 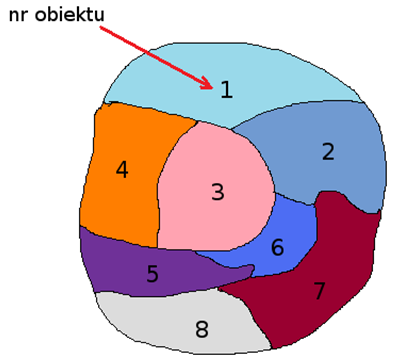 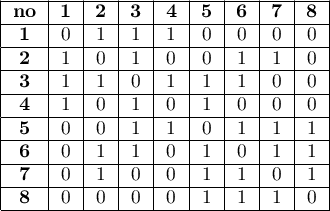 In statistical analyses the most commonly used matrices are row-standardized matrices with the values of each of its rows summing to one. Row standardization means that each weight is divided by the sum of a row (the sum of the weights of all neighboring elements). As a result, the obtained weights are in the range from 0 to 1. The influence of objects with varying numbers of neighbors, in analyses based on a weights matrix standardized in this way, is balanced.

Selected weights matrices should reflect spatial relationships which connect the analyzed objects. The more realistic the reflection of the model of mutual influence of objects in space, the more exact results will be obtained.

The window with settings for weights matrices is accessed via the menu Spacial analysis→Tools→Spatial weights matrix. 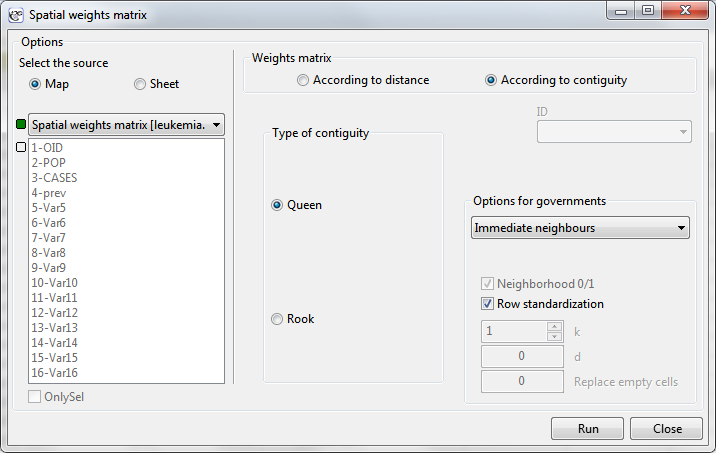 Weights matrix according to distance

Description you can find in User Guide - PQStat, section: the similarity matrix.

Weights matrix according to contiguity

For creating a weights matrix based on proximity of objects (contiguity) we should have at our disposal data from a map which contains objects such as a multipoint or a polygon.

Weights matrix according to contiguity:

Weights matrices can be row standardized -– it is the recommendation of some statistical analyses based on those matrices.