The Kruskal-Wallis one-way analysis of variance by ranks (Kruskal 1952 1); Kruskal and Wallis 1952 2)) is an extension of the U-Mann-Whitney test on more than two populations. This test is used to verify the hypothesis determing insignificant differences between medians of the analysed variable in (

) populations (but you need to assume, that the variable distributions are similar - comparison of rank variances can be checked using Conover's rank test).

medians of the analysed variable of each population.

– ranks ascribed to the values of a variable for

– number of cases included in a tie.

includes the correction for ties

statistic asymptotically (for large sample sizes) has the Chi-square distribution with the number of degrees of freedom calculated using the formula:

Introduction to the contrasts and the POST-HOC tests was performed in the unit, which relates to the one-way analysis of variance.

The Dunn test (Dunn 19643)) includes a correction for tied ranks (Zar 20104)) and is a test corrected for multiple testing. The Bonferroni or Sidak correction is most commonly used here, although other, newer corrections are also available, described in more detail in Multiple comparisons.

corrected on the number of possible simple comparisons

– mean of the ranks of the

The test statistic asymptotically (for large sample sizes) has the normal distribution, and the p-value is corrected on the number of possible simple comparisons

The non-parametric equivalent of Fisher LSD5), used for simple comparisons of both groups of equal and different sizes.

and for degrees of freedom respectively: 1 i

– The mean ranks of the

This statistic follows a t-Student distribution with 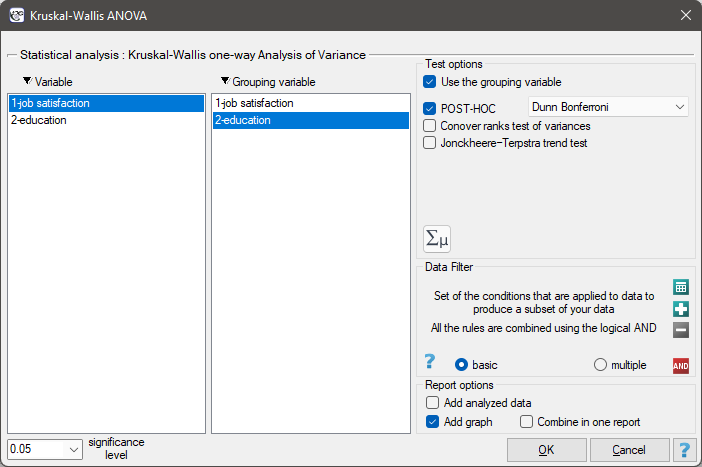 A group of 120 people was interviewed, for whom the occupation is their first job obtained after receiving appropriate education. The respondents rated their job satisfaction on a five-point scale, where:

4- job that gives a fairly high level of satisfaction,

5- job that is very satisfying.

We will test whether the level of reported job satisfaction does not change for each category of education.

The obtained value of p=0.001 indicates a significant difference in the level of satisfaction between the compared categories of education. Dunn's POST-HOC analysis with Bonferroni's correction shows that significant differences are between those with primary and secondary education and those with primary and tertiary education. Slightly more differences can be confirmed by selecting the stronger POST-HOC Conover-Iman. 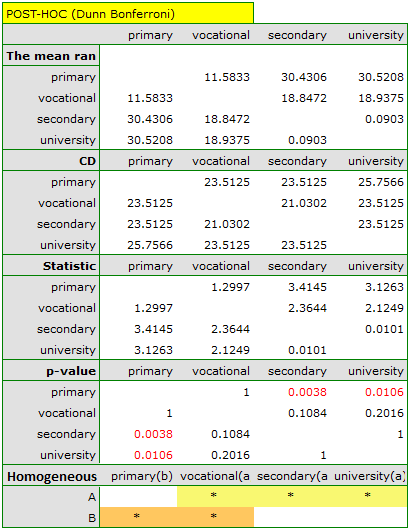 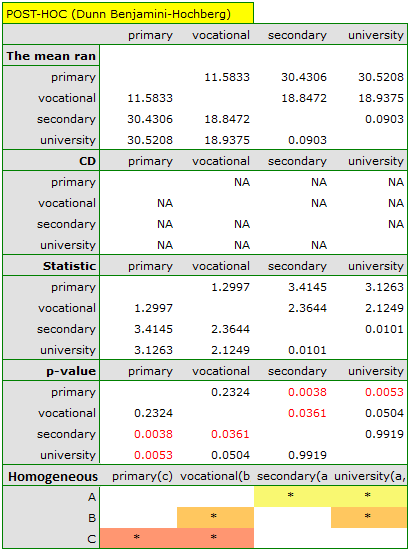 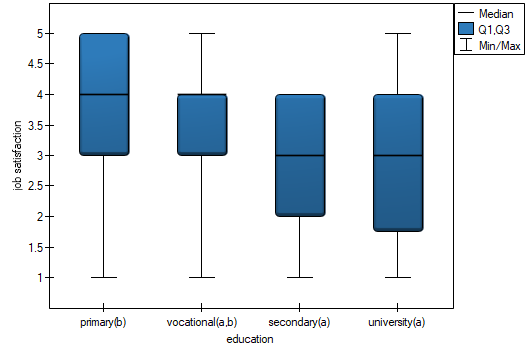 and indicating to add counts and percentages to the description. 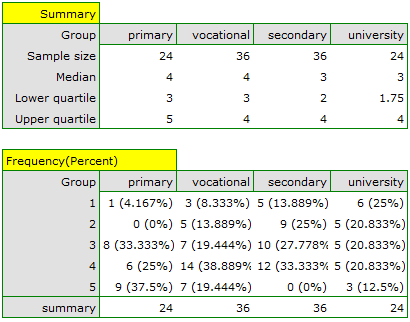 We can also show the distribution of responses in a column plot. 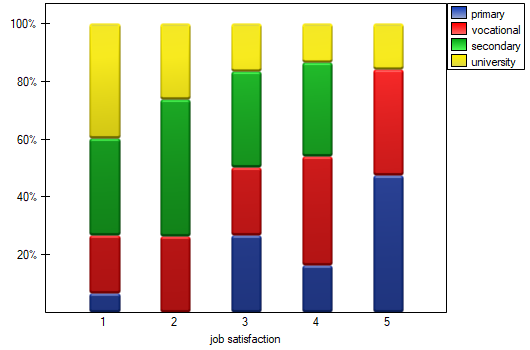