The Map Manager is a tool for managing a map and the layers ascribed to the map. It is possible to view both maps imported to the PQStat program and maps opened directly from an SHP file. 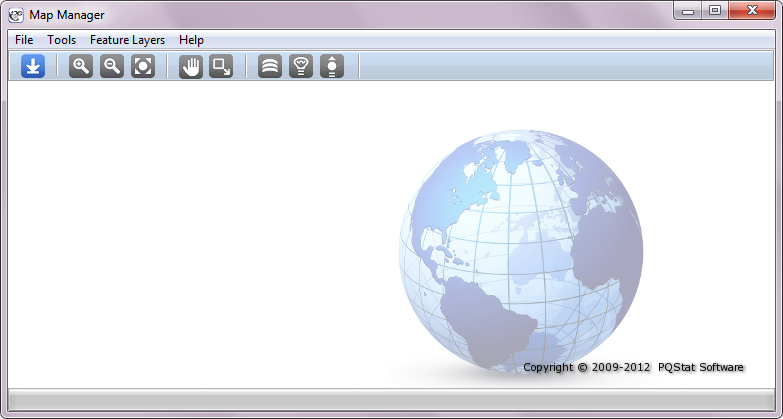 The Map Manager is activated through the:

on the tool bar,

- context menu Map Manager on the name of a datasheet linked to the map.

A map can be opened with the help of the Map Manager:

- menu File→Open file… \textendash if we open a map from a shapefile (SHP),

on the tool bar \textendash if we open a map from the PQStat program,

or in the Navigation tree of the PQStat program:

- context menu Map Manager on the name of the datasheet linked to the map.

The image which presents a map can be exported to a file in the BMP, PNG, or JPG format, by choosing, in the Map Manager window:

– allows to view a map in a larger scale and see its details;

– allows to view a map in a smaller scale and see all its parts;

Adjust to the window

– allows such a view of a map that the whole image is displayed in a window;

– allows to choose a rectangular part of a map, which will be enlarged and adjusted to the window size;

– allows to move the image in the browser window so as to place a given part of the image in a chosen position.

As we are browsing the map we also get a tooltip concerning the ID and the name of the object we point to with the cursor. The name is loaded from the data sheet, it is the variable indicated as active in the Map manager. By default, during import the first variable of the text type is set as active.

We can get more information about the object pointed at by choosing the option Identify from the context menu. In the identification window it is also possible to Activate/Deactivate object.

Creating and saving a selection area allows to choose parts of a map which can later be subjected to a separate analysis.

To select and save a selected area we choose Tools→Create selection area. Then, using the mouse or filling in the fields in the upper part of the Map Manager window, we select the chosen part of a map (elliptical or rectangular shape). The selection is saved with the use of the button Save.

That window is opened with the help of the menu Tools→Edit selection area, and closed with the use of the button Close.

Both a map and elements added to it form layers. Layers are organized so that they only contain information about objects of one type. The use of layered organization enables easy modification of only selected objects.

The basic layer is the base layer containing a map. We can add new elements to that layer by creating new layers.

It is a layer created together with a report on the statistical spatial analysis. It presents the result of the statistical analysis, appended to the report. The information about the existence of layers one can draw on the map can be found at the bottom of the report (the button

). The layer can also be added with the button

in the Map Manager window.

As long as there are no reports on statistical spatial analysis, the option window for analysis results is empty. When there are such reports the option window contains a list of layers. The names of the layers on the list consist of the name of the report from which a layer comes, together with the date and hour the report was created, and a description of the type of objects drawn there.

in the Map Manager window). The map view can be a single layer or it can consist of a number of layers. It cannot be edited directly. The change of the look of the view is only possible when particular layers forming that view and placed in a real location (i.e. linked to another datasheet) are edited.

A centroid of a polygon is a point lying within a polygon and representing the center of mass (O'Rourke J (1998)1)).

A label is any text or number concerning objects presented on a map. Objects can be described by choosing from the datasheet a variable which contains proper labels.

Min. Bounding - convex hull –that is the smallest convex polygon in which analysed objects are enclosed (Yamamoto J.K. 1997 2));

Min. Bounding - rectangle – that is the smallest rectangle in which analysed objects are enclosed;

Min. Bounding - circle – that is the smallest circle in which analysed objects are enclosed;

Rectangle from map bounding – that is a rectangle in which analysed objects are enclosed, with coordinates of the lower left-hand vertex = (

) and of the upper right-hand vertex = (

. If the source of a layer (a report or a map linked to the layer) is removed then such a layer is automatically removed from the layer list.

We can edit map layers by choosing the button

in the map list. The manner of editing depends on the type of objects presented on a given map (points, multipoints, lines, polygons). It is possible to select the style of lines, color fill, and the level of its transparency. By default the coloring utilizes one color only. In the case of layers representing the base map there is a number of coloring methods.