The Jonckheere-Terpstra test for trend

Hypotheses are simplified to medians:

The term: „with at least one strict inequality” written in the alternative hypothesis of this test means that at least the median of one population should be greater than the median of another population in the order specified.

The test statistic has the form:

values obtained for each pair of compared populations,

– number of results higher than a preset value in the next occurring group,

– umber of cases included in the tied rank,

To be able to perform a trend analysis, the expected order of the populations must be indicated by assigning consecutive natural numbers.

includes the correction for ties. This correction is applied when tied ranks are present (when there are no tied ranks the test statistic formula reduces to the original Jonckheere-Terpstra formula without this correction).

The settings window with the Jonckheere-Terpstra test for trend can be opened in Statistics menu→NonParametric tests→Kruskal-Wallis ANOVA or in ''Wizard''. 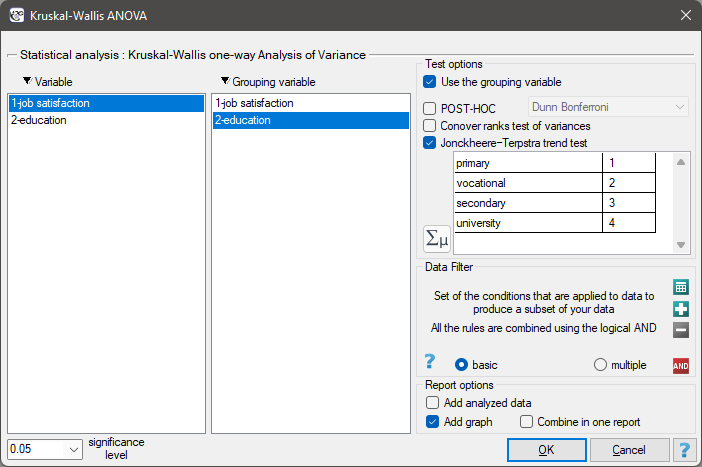 It is suspected that better educated people have high job demands, which may reduce the satisfaction level of the first job, which often does not meet such demands. Therefore, it is worthwhile to conduct a trend analysis.

To do this, we resume the analysis with the 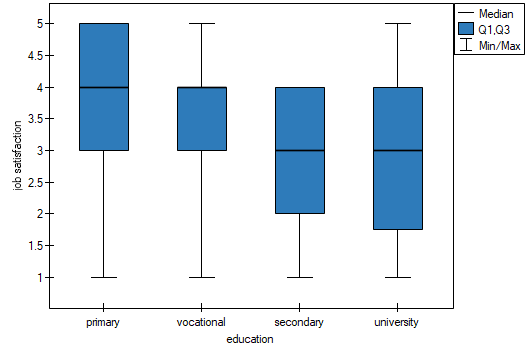 The obtained one-sided value p<0.0001 and is less than the set significance level

, which speaks in favor of a trend actually occurring consistent with the researcher's expectations.

We can also confirm the existence of this trend by showing the percentage distribution of responses obtained. 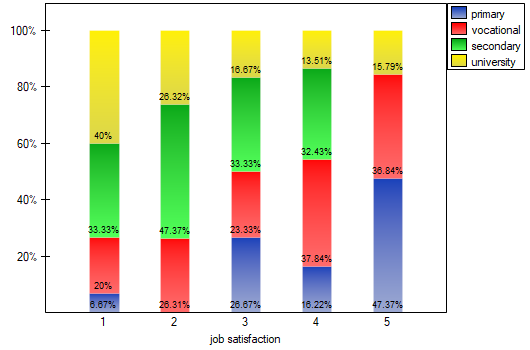