and the alternative one

Researcher must formulate the hypotheses in the way, that it is compatible with the reality and statistical test requirements, for example:

If you do not know, which percentage (men or women) in an analysed population might be greater, the alternative hypothesis should be two-sided. It means you should not assume the direction:

Note, that choosing a statistical test means mainly choosing an appropriate measurement scale (interval, ordinal, nominal scale) which is represented by the data you want to analyse. It is also connected with choosing the analysis model (dependent or independent)

Some examples of researches in dependent groups:

Some examples of researches in independent groups:

Examining a body mass in a group of healthy patients and ill ones, testing effectiveness of fertilising several different kinds of fertilisers, testing gross domestic product (GDP) sizes for the several countries etc.

A graph which is included in the ''Wizard'' window makes the choice of an appropriate statistical test easier.

Test statistic of the selected test calculated according to its formula is connected with the adequate theoretical distribution. 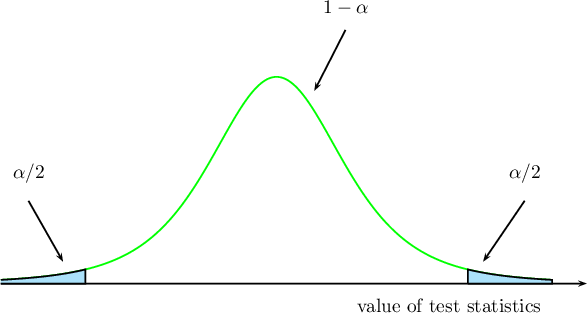 value enables you to choose a more probable hypothesis (null or alternative). But you always need to assume if a null hypothesis is the right one, and all the proofs gathered as a data are supposed to supply you with the enough number of counterarguments to the hypothesis:

There is usually chosen significance level

, accepting that for 5 % of the situations we will reject a null hypothesis if there is the right one. In specific cases you can choose other significance level for example 0.01 or 0.001.

Note, that a statistical test may not be compatible with the reality in two cases:

We may make two kinds of mistakes:

Power of the test is

are connected with each other. The approved practice is to assume the significance level in advance

by decreasing a sample size.