The transformation window is accessed via Data→Transform… 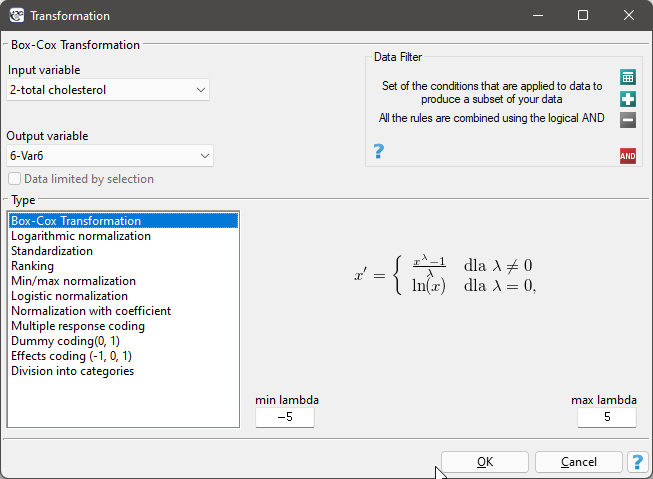 Data transformation is the alteration of data so that it meets certain criteria, such as meeting the criteria for normality of distribution or extending within a specified range.

. Positive data are required to perform the transformation. If the data are not positive, it is recommended to first transform them to positive numbers using the min-max normalization method.

The Box-Cox transformation is expressed by the formula:

where the value of

is determined as the maximum value of the log-likelihood function (

) in the interval specified by the researcher. The default range for searching for

function is described by the formula:

The logarithmic transformation can be used to reduce the skewness of the distribution i.e. when we are dealing with a lognormal distribution.

Standardization, is a transformation of data that results in a variable having a mean of 0 and a standard deviation of 1.

Ranks - are consecutive numbers (usually natural) assigned to the values of ordered measurements of the variable under study. They are often used in those nonparametric tests that rely solely on the order of items in the sample. Assigning ranks calculated according to a variable is called ranking. Ranking can be done for variables sorted ascendingly (this is the default setting) or descendingly.

Recurring values of a variable are assigned a tied rank. The tied rank can be a/an:

- arithmetic mean calculated from the proposed consecutive natural numbers for repeated values - this is the default setting; 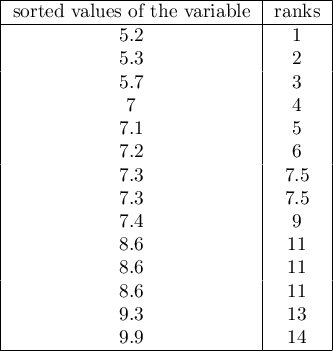 ). You should know the range that the data can cover. If you do not know the range, you can use the largest and smallest value in the analysed set (in the Transformation window, then select the Calculate from sample option)..

If you want to stretch the transformed data over a range other than the specified one, then enter the span of the new range in the Transformation window.

value creates a graph with a smoother slope.

This type of coding allows the answers given to multiple-choice questions to be prepared in such a way as to facilitate their further statistical processing. As a result of applying this transformation, a selected variable with

-possible answers is broken down into

new variables. It is necessary to specify which character (or set of characters) is a separator of particular categories. For example, respondents were asked what kind of alcohol they drink? The data is stored in Alcohol column, separating multiple answers with semicolon sign. This way of storing data does not even allow for a simple summary. Among other things, it is not possible to quickly count how many people drink wine. After recoding the multiple responses, three new columns were obtained - one for each possible answer. Each of these columns can now be statistically analysed.

Transforming a variable with

categories by dummy coding allows you to obtain

dummy variables. This form of transformation is primarily used in regression models. A detailed description of this type of transformation can be found in PREPARING VARIABLES FOR ANALYSIS IN MULTI-DIMENSIONAL MODELS.

Transforming a variable with

dummy variables. This form of transformation is used primarily in regression and ANOVA models. A detailed description of this type of transformation can be found in PREPARING VARIABLES FOR ANALYSIS IN MULTI-DIMENSIONAL MODELS.

This way of preparing data allows for any division of variables, e.g. total cholesterol can be divided according to the current standards (choose Manual division, set the number of categories and enter their limits ourselves and give appropriate labels to each category). However, if we do not have an idea for dividing our data, we can use the automatic division options presented in the window. Possible ways of dividing a variable:

In the division window, it is also possible to select Add color scheme then the column that will store the new data will be color coded according to the indicated scheme.

Perform a transformation on the variables contained in the file:

a) Transform the value of triglycerides using the Box-Cox transformation and then check with the appropriate test whether the data have a normal distribution.

b) Transform the value of triglycerides using the logarithmic transformation and then check with the appropriate test whether the data have a normal distribution.

e) Using normalization with a coefficient, transform the selected variables to the specified range. Do it several times, changing the value of the coefficient

f) Standardize all data that are normally distributed.

g) Transform the variable showing how body weight changed during the diet so that it represents a normal distribution.

h) The question about past infectious diseases was a multiple choice question. Prepare the obtained answers to this question so that they can be further statistically processed i.e. record each of the multiple answers in a different column.

i) Prepare the education variable so that it is stored using dummy variables with dummy coding.

j) Prepare the total cholesterol variable by dividing it into 3 classes according to the percentiles (quartiles). Give the created classes labels : „low”, „average”, „high” and choose the color scheme.