The relationship between objects can be expressed by their distances or more generally by their dissimilarity. The further apart the objects are, the more dissimilar they are, while the closer together they are, the greater their similarity. It is possible to examine the distance of objects in terms of many features, e.g. when compared objects are cities, their similarity can be defined, among others, based on: length of the road that connects them, population density, GDP per capita, pollution emissions, average real estate prices, etc. With so many different features you have to choose the measure of distance in such a way, that it best reflects the actual similarity of objects. 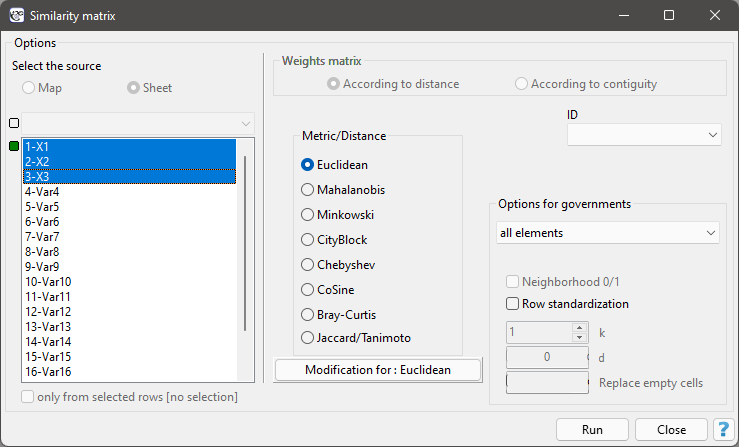 We express the dissimilarity/similarity of objects by means of distances which are most often metrics. However, not every measure of distance is a metric. For a distance to be called a metric it must meet 4 conditions:

Metrics should be calculated for features with the same value ranges. If not, then features with higher ranges would have a greater impact on the similarity score than those with lower ranges. For example, when calculating similarity between people, we can base it on such features as body mass and age. Then body mass in kilograms, in the range of 40 to 150 kg, will have a greater influence on the result than age in years, in the range of 18 to 90 years. To ensure that the effect of each characteristic on the resulting similarity score is balanced, you should normalize/standarize each characteristic before proceeding with the analysis. On the other hand, if you want to decide the magnitude of this influence yourself, after applying the standardization, indicating the type of metric, you should enter the weights you gave yourself.

The Minkowski distance is defined for parameters

equal to each other - it is then a metric. This type of metric allows one to control the similarity calculation process by specifying values of

included in the formula:

increases the weight assigned to the difference between objects for each feature, changing

are equal to 2, Minkowski distance reduces to Euclidean distance, if they are equal to 1, to CityBlock distance, and with these parameters approaching infinity, to Chebyshev metric.

This is a distance that allows you to move in only two directions perpendicular to each other. This type of distance is similar to moving on perpendicularly intersecting streets (a square street grid that resembles the layout of Manhattan). This metric is given by the formula:

The distance between the objects being compared is the greatest of the distances obtained for each characteristic of those objects:

1) Variables for which larger variances or larger ranges of values are observed do not have an increased effect on the Mahalanobis distance score (since when using a covariance matrix you standardize the variables using the variance located on the diagonal). As a result, there is no requirement to standardize/normalize the variables before proceeding with the analysis.

The measure calculated in this way meets the conditions of the metric.

The Cosine distance should be calculated using positive data because it is not a metric (it does not meet the first condition:

). So if you have features that also take negative values you should transform them beforehand using, for example, normalization to an interval spanned by positive numbers. The advantage of this distance is that (for positive arguments) it is limited to the range [0, 1]. The similarity of two objects is represented by the angle between two vectors representing the features of those objects.

is the similarity coefficient (cosine of the angle between two normalized vectors):

Text 1: several people got on at this stop and one person got off at the next stop

Text 2: at the bus stop, one lady got off and several got on

One wants to know how similar the texts are in terms of the number of the same words, but is not interested in the order in which the words occur.

You create a list of words from both texts and count how often each word occurred:

The cosine of the angle between the vectors is 0.784465, so the distance between them is not large

In a similar way, you can compare documents by the occurrence of keywords to find those most relevant to the search term.

The Bray-Curtis distance (measure of dissimilarity) should be calculated using positive data because it is not a metric (it does not meet the first condition:

). If you have features that also take negative values, you should transform them beforehand using, for example, normalization to an interval spanned by positive numbers. The advantage of this distance is that (for positive arguments) it is limited to the interval [0, 1], where 0 - means that the compared objects are similar, 1 - dissimilar.

In calculating the similarity measure

, we subtract the Bray-Curtis distance from the value 1:

Jaccard's distance (measure of dissimilarity) is calculated for binary variables (Jaccard, 1901), where 1 indicates the presence of a feature 0- its absence.

The Jacckard distance is expressed by the formula:

Jaccard similarity coefficient is in the range [0,1], where 1 means the highest similarity, 0 - the lowest. Distance (dissimilarity) is interpreted in the opposite way: 1 - means that the compared objects are dissimilar, 0 - that they are very similar. The meaning of Jaccard's similarity coefficient is well described by the situation involving the choice of goods by customers. By 1 we denote the fact that the customer bought the given product, 0 - the customer did not buy this product. Calculating the Jaccard coefficient you compare 2 products to find out what part of the customers buy them in together. Of course we are not interested in information about customers who did not buy either of the compared items. Instead, we are interested in how many people who choose one of the compared products choose the other one at the same time. The sum

- is the number of customers who chose either of the compared items,

The formula for Jaccard's similarity coefficient can also be written in general form:

proposed by Tanimoto (1957). An important feature of Tanimoto's formula is that it can also be computed for continuous features.

For binary data, Jaccard's and Tanimoto's dissimilarity/similarity formulas are the same and meet the conditions of the metric. However, for continuous variables, Tanimoto's formula is not a metric (does not meet the triangle condition).

We study the genetic similarity of members of three different species - in terms of the number of genes they share. If a gene is present in an organism, we give it the value 1, 0 - in the opposite case. For the sake of simplicity only 10 genes are analysed.

The calculated similarity matrix is as follows:

Specimens 1 and 2 are most similar and 1 and 3 are least similar:

- The Jaccard similarity of specimen1 and specimen 3 is 0.375, meaning that more than 37\% of the genes found in the two compared species are shared by them.

Choosing the option Neighborhood 0/1, we replace the values inside the matrix with 1, and empty spaces with 0. This way, we mark, for example, whether the objects are neighbors (1) or not (0), that is, we determine the neighborhood matrix.

Opcja Replacacing empty cells allows you to enter the value to be placed in the matrix in place of any empty items. The selected object ID allows you to name the rows and columns of the similarity matrix according to the naming stored in the indicated variable.

In real estate valuation procedures, for both substantive and legal reasons, the issue of similarity plays an important role. For example, it is an essential prerequisite for grouping objects and assigning them to an appropriate segment.

Data for these locations are summarized in a table, where 1 indicates that the location meets the search conditions, 0 that it does not. 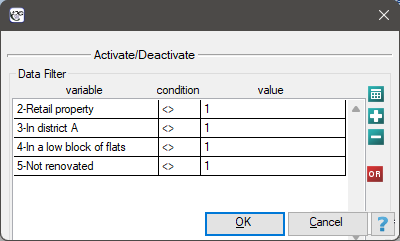 Remember to combine the deactivation conditions with the alternative (replace

Now we will consider those features that have a strong influence on the customer's decision, but are not decisive:

Note that the last feature, the distance of the public transportation station, is expressed by much larger numbers than the other features of the compared locations. As a result, this feature will have a much greater impact on the distance matrix than the other features. To prevent this from happening before the analysis, normalize all the features by choosing a common range from 0 to 1 for them - to do this, use the Data→Normalization/Standardization… menu. In the normalization window, set „Number of rooms” as the input variable and an empty variable called „Norm(Number of rooms)” as the output variable; the normalization type is normalization min/max; the values of min and max are calculated from the sample by selecting the Calculate from sample button - the normalization result will be returned to the datasheet when the Ok button is clicked. The normalization is repeated for the following variables ie: „Floor”, „Building Age”, „Distance to Center” and „Station Distance”. 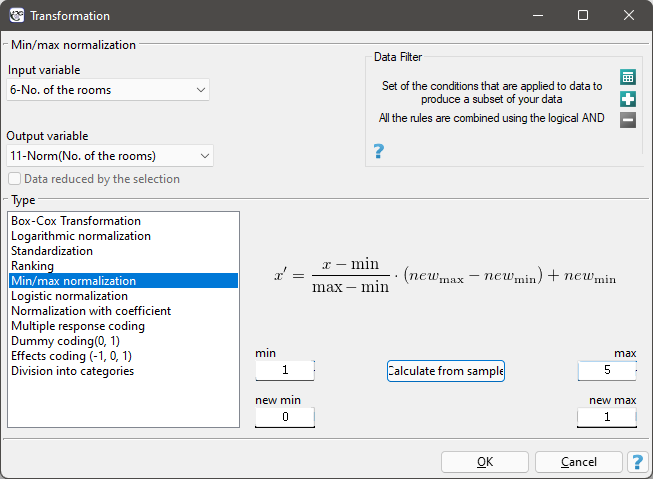 The normalized data is shown in the table below.

Based on the normalized data, we will determine the locations that most closely matches the customer's request. To calculate the similarity we will use the Euclidean distance metric. The smaller the value, the more similar the units are. The analysis can be performed assuming that each of the five features mentioned by the client are equally important, but it is also possible to indicate those features that should have greater influence on the result of the analysis. We will construct two Euclidean distance matrices:

To build the first matrix, in the similarity matrix window, we select 5 normalized variables labeled as Norm, the Euclidean metric, and as Object Identifier the variable „ Location”. 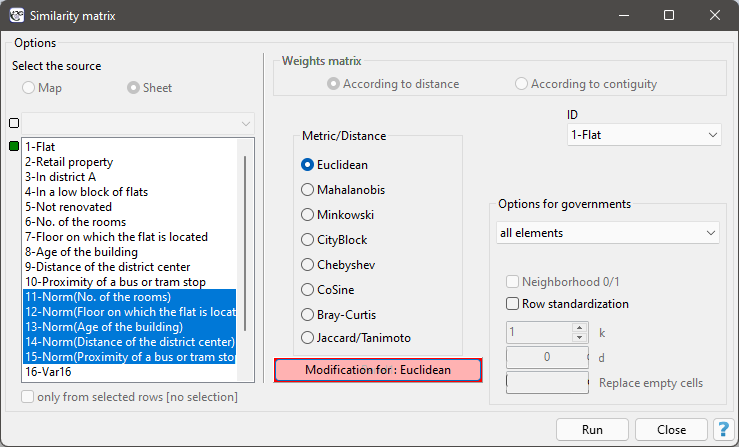 To build the second matrix, we use the same settings in the similarity matrix window as we did to build the first matrix, but in addition, we select the Modification for : Euclidean button and in the modification window, we enter larger values for „Number of rooms” and „Distance to city center”, e.g., equal to 10, and smaller values for the other features, e.g., equal to 1. 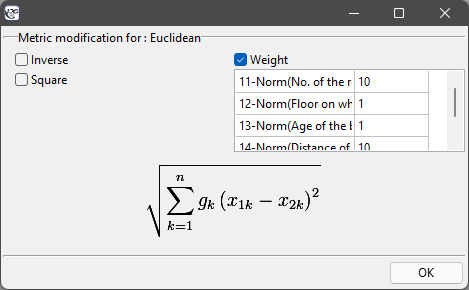 This will result in two matrices. In each of them, the first column refers to how similar it is to the location the customer is looking for: 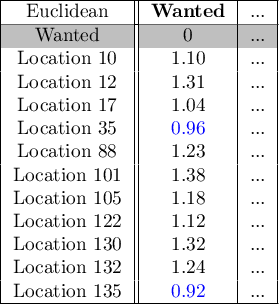 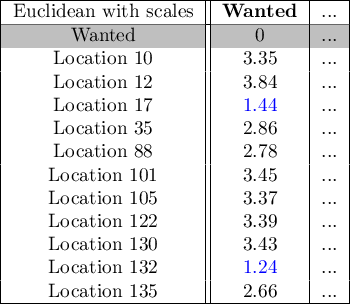 According to the unmodified Euclidean distance, location 35 and location 135 should most closely match the client's requirements. When the weights are taken into account, locations 17 and 132 are the closest to the client's requirements - these are the locations that are primarily similar in terms of the number of rooms required by the client (3) and the indicated distance to the center, with the other 3 features having a smaller impact on the similarity score.